Emma-Joy Ferris likes mall cop work, even though it's a bit more humdrum than the military policing she did in the army.

But there's no time to be bored when someone 'liberates' a 15-foot python from the Herpetology Hut, and a mannequin turns out to be a very real corpse.

Emma-Joy “EJ” Ferris, a security officer with the Fernglen Galleria, likes mall cop work, although it’s usually more humdrum than the military policing she did until an IED left her with a bum knee and a medical retirement at thirty-one.

Relocated to Vernonville, Virginia, 50 miles from Washington D.C., EJ deals with shoplifting teens, vandals spray-painting Christian graffiti on cars, and a boss who acts like the halls of Fernglen are the mean streets of Newark. She also copes with her 83-year-old Grandpa Atherton, a long-retired CIA operative who likes to “keep his hand in” by purchasing all the latest techno-gadgets and spying on mall customers and shopkeepers.

EJ’s boredom vanishes the week someone “liberates” all the reptiles, including a 15-ft python, from The Herpetology Hut (known to mall denizens as Herpes Hut) and a body turns up, posed as a mannequin, in the window of Diamanté, an upscale boutique. With the help of her mall “family”—her friend Kyra who runs the magic store; Joel, her fellow mall cop who hero-worships her; and the attractive and mysterious Jay Callahan who recently bought the cookie franchise—and her Grandpa Atherton, EJ must quickly catch the killer since fear of another murder is emptying the mall faster than you can say, “All sales final.”

Endorsements
Charming, fun, and refreshing.
– Seattle Post-Intelligencer
A fun mystery.
– The Washington Post
A great mystery. I was constantly kept guessing.
– Min Jung, Fresh Fiction
A wonderful start to a new series, with likable characters, lots of humor, and a swift-moving story.
– Lisa Allmendinger, Cozy Corner
One of the Top Four cozy mysteries of 2011. This novel will crack you up with DiSilverio’s humor and razor’s-edge wit.
– Suspense Magazine
I’m eager to read the next installment of this offbeat series.
– Mystery Scene
Order Now

Other Books in "Mall Cop Mysteries" 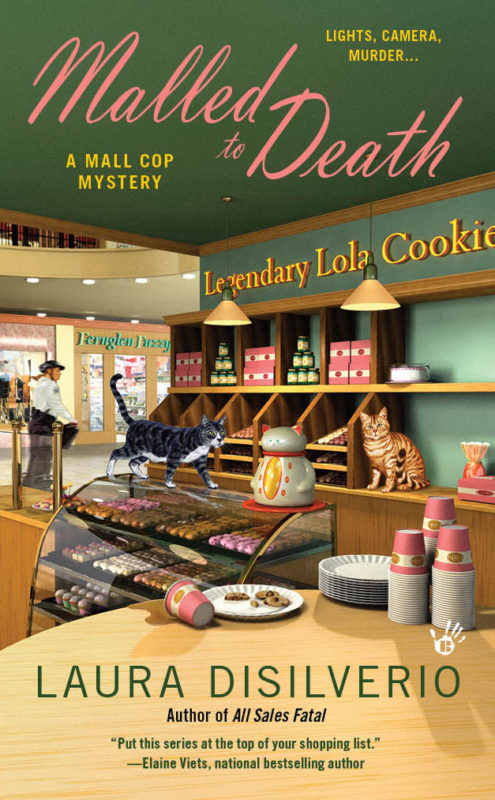 Malled to Death
Preview
Sign up for Updates
Disclosure of Material Connection: Some of the links in the page above are "affiliate links." This means if you click on the link and purchase the item, I will receive an affiliate commission. I am disclosing this in accordance with the Federal Trade Commission's 16 CFR, Part 255: "Guides Concerning the Use of Endorsements and Testimonials in Advertising."